← Cambodian History – Early Years
From a Travel Show In Cambodia To Starting an Adventure Tour Company: An Interview With Scott From Sabai Adventures →

The following review was posted on Tripadvisor.com and written by a couple that joined us on a moto bike tour. The reviewer, Liam,  is a top contributor on Tripadvisor with over a hundred reviews and counting. We decided to blog this review not only for the kind words written about the motobike tour he did with us, but also because of the excellent photographs that were taken by Liam on  this tour.

A Great Way to See Rural Siem Reap – by Liam

We did the Easy Rider tour in mid June 2014. We were picked up promptly at 830am by Scott (Canadian owner of Sabai Adventures Cambodia – very nice guy) and Sochi, who would later be our tour guide. We got on the back of their moto bikes and took the quick 10 minute drive from our hotel in the heart of Siem Reap to their starting point. Scott and Sochi then gave us a good tutorial on how to ride our moto bikes, including instructions on how to start, stop, turn, park, etc. Neither my partner or I had any experience on moto bokes… but that wasn’t a problem at all.

Along the way in the Cambodian countryside

Sochi then took us out for our tour, which started at about 9:15am before ending just before 3pm (so about 6 hours). You start with a brief drive within the city (very doable, nothing with crazy traffic) and then head out to the countryside, alternating between dirt and paved country roads.

Along the way, we stopped several times for water (paid for by Sabai). We also stopped for lunch at a restaurant at about 1pm (also included in the tour price).

Stopping along the way to see locals plant rice

Sochi also stopped at a public school, a dirt road crossroads where locals ply their trade, an out of the way temple, and a house where a family makes rice noodles for commercial purposes. See my pictures to get a better sense of where the tour took us. Sochi also stopped along the way to provide us with good photo opportunities, or to provide information on our surroundings, including farming methods, local flora and fauna, etc. Plus, we stopped a lot to take pictures whenever we saw something picture worthy, which was often. Sochi was more than happy to wait while we indulged ourselves. 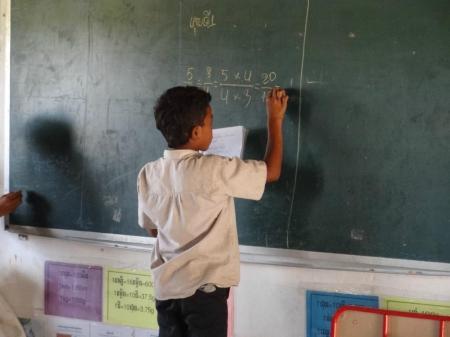 Visiting a countryside school in session

We really enjoyed ourselves on the tour. It felt like a genuine Cambodian experience, riding on the local mode of transportation of choice. We didn’t run into any other tourists except for during our lunch – and best of all, we got to do the tour alone, just with us and Sochi.

← Cambodian History – Early Years
From a Travel Show In Cambodia To Starting an Adventure Tour Company: An Interview With Scott From Sabai Adventures →