← Photo of the Day – From Cambodia
22 Interesting Travel Facts → 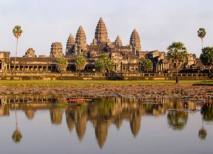 Angkor Wat was first a Hindu, later a Buddhist, temple complex in Cambodia and the largest religious monument in the world. The temple was built by the Khmer King Suryavarman II in the early 12th century. Today, visitors from around the to visit this ancient wonder located in Siem Reap, Cambodia.

1. Constructed in the early 12th century (between 1113 and 1150) Angkor Wat is the largest religious monument in the world.

2. Angkor Wat is unusually oriented to the west, a direction typically associated with death in Hindu culture. Archaeologists and scholars disagree as to why the ancient builders chose to deviate from the ‘norm’ at the time.

Angkor Wat faces west as the sun rise behind the temple

3. Also unusual for the time of construction, Angkor Wat was dedicated to Vishnu, a Hindu deity, rather than the current king.

4. Angkor Wat was shifted from Hindu to Buddhist use sometime around the late 13th century. The temple is still used by Buddhists today.

5. Jacqueline Kennedy risked a visit to Angkor Wat during the Vietnam War to fulfill a “lifelong dream” of seeing the monument.

8. Many visitors do not realize that many surfaces of the Angkor temples were once painted. Today, only small traces of the paint remains on just a few temples.

9. One of the first Westerners to see Angkor Wat was Antonio da Madalena, a Portuguese monk, who visited in 1586. Long before Europeans arrived, a Chinese emissary named Zhou Daguan lived in Angkor for one year between 1296 and 1297; he created a written account of his experience there sometime before 1312.

10. The sandstone used to construct Cambodia’s national monument, at least 5 million tons worth, had to be carried from a quarry 25 miles away.

← Photo of the Day – From Cambodia
22 Interesting Travel Facts →